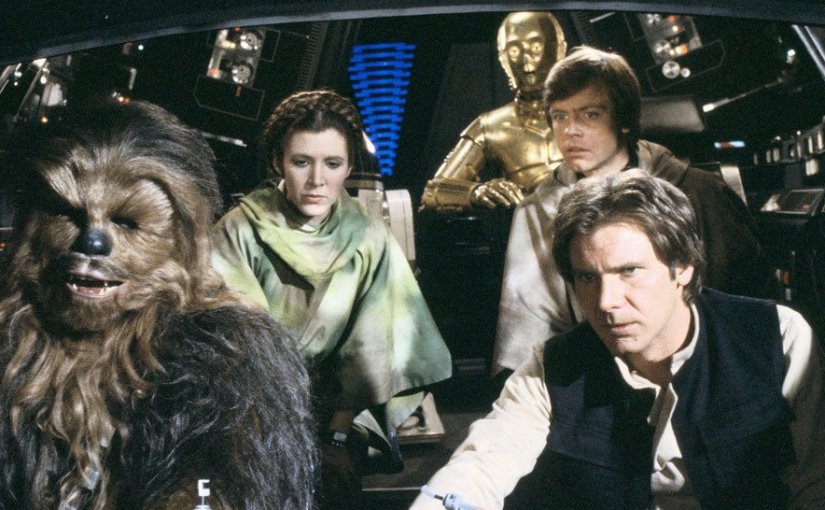 A while back, I was talking with a friend and fellow writer about a future project. While describing it, I called it a “Team story,” and then squinted.

“Is there a better word for that? Like, a story where your characters are one team?”

And I remember thinking, “Is that what I’m talking about?” In the moment I was just like, “Sure,” but I kept thinking about it for a while because, in typical bureaucrat fashion, I wanted to find the perfect heading to sort my ideas under and I knew it wasn’t “ensemble cast.”

Because Game of Thrones has an ensemble cast, but it is not a story about a united team.

Something like Friends, however, does star an ensemble cast while also presenting those characters as one, cohesive unit for the audience to love.

And it’s the latter part–the team part–that I was trying to get at. I now have two future projects that are going to require a balanced team with interesting dynamics, and because my life this week has been steeped in Star Wars, I’ve been thinking a lot about highly dynamic, synergetic teams.

Or–as I have ultimately, lazily classified them in my head–crews.

So let’s talk about them.

Not whether they’re good or bad, but just what I’m learning from looking at / remembering a few standout examples.

What I’ve Learned About Crews (So Far)

Seriously, part of the reason The Mandalorian feels so fresh is because it’s the only popular Star Wars story that doesn’t have a crew.

Anyway, let’s get into it:

Two Crews That Didn’t Work for Me

I’m still trying to be more positive on here, but I do have to point out the two crews I didn’t find interesting (and explain why).

I watched 6 or 7 episodes of Rebels while working on my computer, and I ultimately wasn’t hooked for a few reasons. The reason related to this post: the crew was split into two extremes.

On one hand, you had Ezra, Zeb, and Chopper who were always bickering and playing pranks on each other.

On the other hand, you had Hera, Sabine, and Kanan who were all super capable and professional.

I’m sure the show gets better, but the team chemistry just wasn’t there. Everyone had good Specializations, their Plot Functions were super clear, and they all looked unique from each other, but they all felt like they were sharing two personalities, so I ultimately had to bail.

Now, I’m ending here with a crew most people haven’t experienced because it comes with a lesson.

Pictured above is the entire crew. From left to right, it’s BD-1, a little droid who specializes as the hacker and can’t speak Common. Next is Greez, the pilot and comic relief. Then there’s Cere Junda, the Designated Plot-Driver and secondary hacker. Cal is our redheaded Protagonist. And last is Nightsister Merrin, who’s arguably the Muscle (because Cal would be, but she’s a space witch who saves his life a ton) and is also, believe it or not from this picture, more Comic Relief.

So what’s the lesson here?

Never have one member of the crew join super late in the story.

Nightsister Merrin doesn’t join the Mantis until insanely late in the game. Seriously, she joined my crew last night, after, like, 20 hours of playtime. Which is bizarre because . . .

. . . this crew is not complete without her.

This is not a waifu joke; seriously, dialogue in the Mantis was so boring before she joined.

For 20+ hours, cutscenes with the crew were extremely one-note. Cal was goal-oriented, Cere was goal-oriented, BD-1 was goal-oriented, and Greez, while charming, just followed orders and complained. Very quickly, everyone believed in and supported each other, so there was just nothing to look forward to in their interactions. Even a mid-game semi-twist with Cere didn’t throw off the “we have to keep fighting for what’s right” vibe.

After Merrin, dialogue is likely to take a weird turn when she asks things like, “What Empire?” because she grew up on Dathomir and has no idea the First Galactic Empire even exists. When Cere asks her about her magic, Greez might compare it to the time he ate a huge steak to win a prize, and Merrin might say–against all odds and in perfect, non-combative monotone, “Yes. My magic is exactly like eating steak.”

And just . . . h’oh my God! They have chemistry now! How? How did the one extra character make the most boring crew ever so much fun? I want to actually listen to their dialogue now. And even though I assumed the crew of the Mantis was a safe, corporate decision for 20+ hours, I now feel like I’m playing the main writer’s head canon crew that they’ve been nursing since Revenge of the Sith. And I actually want a sequel for this game I never thought I’d like (which, btw, if you haven’t played Fallen Order and you’re looking for a decent Souls-like, it’s way better than it has any right to be [just put it on max difficulty and prepare to die]).

But, look, whatever. I’m sure I’ll turn on that game in a little bit and Merrin will immediately peace out or Cal will die, but the lesson I took from that experience (aside from never ever bury one of your crew members at the end of your story–why would you ever do that???) is this: there is a very fine line between an incredibly boring crew and a super fantastic one. You can be off by just one character.

There is no formula here–at least not one that I’m aware of. You can play fast and loose with your character’s Specializations and Functions, and you should to make sure they, as a whole, are unique.

As always, I have to add the extra disclaimer that I am just a man, not a professional. I don’t know the ins and outs of making a compelling team of characters.

But hey, it can’t hurt to talk about it.

Apologies for getting this one out late, but I was working through my observations as I wrote them here.

But either way, it’s 4AM and I need to go pass out.

Take care, and, always be secure in the fact that if you’ve already eaten one cookie, a second cookie will not kill you. Goodnight!