Where I Wrote: First at a small lounge on the western end of Vesey St., overlooking a ferry port. Then the Winter Garden just a short way east on the same block.

How I Feel About What I Wrote: Glad and grateful that yesterday’s writing issues were solved today.

The Mood I Brought to the Table: So goddamn ready.

The Experience: Today was so good.

I didn’t wake up early, but I got out at a decent time and headed for the Winter Garden, yet another entry on my short list of no-bullshit writing spots. I haven’t been there before, but it was a place that was guaranteed to be open, indoors, and have both seating and restrooms.

Of course, getting to where I thought it would be and finding signs for construction was a bit disappointing. Not completely disheartening, but just, “Of course.” Having a weird kind of sense for shenanigans now though, I decided to keep walking west; I knew that there were a ton of entrances to Brookfield Place–the building the Winter Garden is in–and that those entrances led to different parts of the building in different states of disrepair. 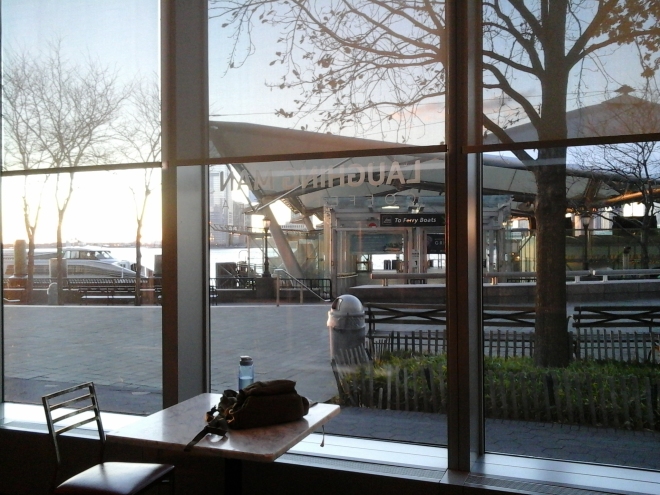 Walking west eventually led me to a small public lounge looking over the ferry port at the end of Vesey St. There’s a fantastic chance this place has a name (very likely, it’s part of Brookfield Place), but all I really cared about was nabbing my picture, grabbing a seat, and getting to work.

The first part of today’s writing session was fixing the mess I left for myself yesterday. To recap, it was a single scene that I Frankensteined the fuck out of; I wrote the entire scene one way, replaced only the first half of it with an alternate approach to the scene (essentially changing my protagonists’ plan for the endgame) and then ended the scene with an extremely important decision that I made hastily yesterday and had to make for real today. When I stopped yesterday, it was genuinely because I didn’t want to ruin the scene even more. That makes it sound like I was super defeated, but I wasn’t; I know well enough when I’m too out of it to make sense of a confusing scene, so I called it quits with the certainty that an evening of brainstorming would help sort things out.

Lo and behold walking back the way I’d come and taking a longer look into an obnoxiously large entryway I’d only glanced into earlier–a large room of white marble that, aside from escalators in the middle, looked exactly like an area I’d just written a few days ago in Memory (making it so strangely inviting). What really made me enter, however, was a sign declaring that this place had restrooms. I asked the first guard I saw about them.

And he said, “Oh yeah. Just make this right, then the only left you can make. From there, you’re going to go down the first escalators you see, then go straight through the Winter Garden, up the escalators on the other side.” 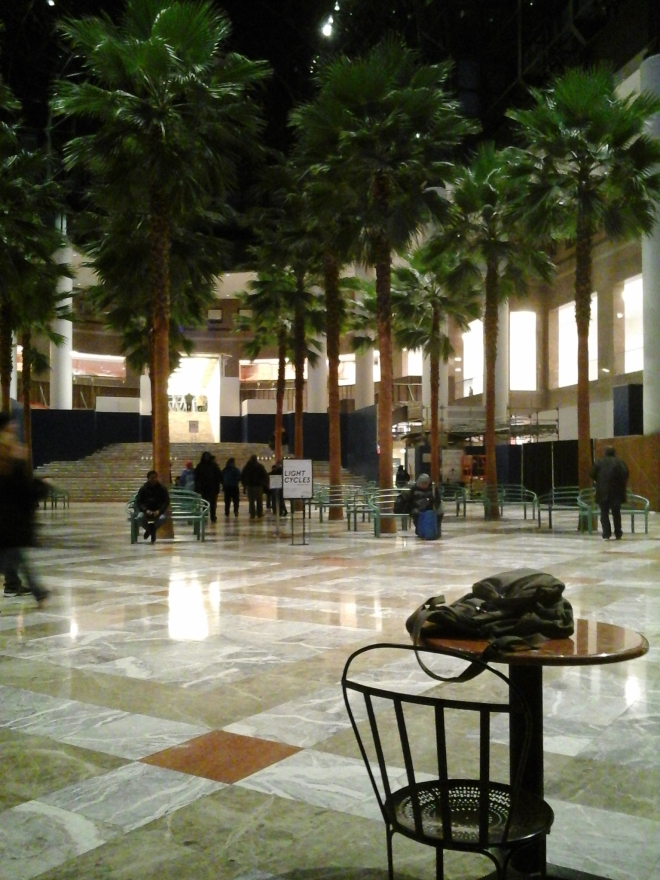 The Winter Garden turned out to be mostly under construction, which, coupled with its already being night time (and the fact that there were no light cycles to be seen or ridden anywhere, despite the sign pictured above) made it a bit… strange? I think I saw it in its worst light, is what I’m trying to say. There were palm trees and a skating rink outside. There was an extremely elaborate food court (probably the nicest one I’ve ever seen anywhere), but the combination of people huddling for warmth under palm trees in a courtyard made of marble but lined with construction ply wood made for the most confusing, disjointed first impression. Also, I didn’t find coffee anywhere. I am not complaining; I don’t want to come off sounding like one of the spoiled bastards I mentioned in the last post, but coffee is a pretty important part of my writing process these days–the means by which I either stay awake or go so insane on caffeine that the crazy fantasy ideas keep coming.

That’s all to say that of all the writing spots I’ve tried during 30 Days, the Winter Garden is likely the one I won’t return to–for writing, that is (I’ll very likely be back some time to actually shop, read, or eat).

Here, I determinedly decided to catch my characters up to the second to last chapter. When I left the ferry lounge earlier, I was intending to either find restrooms and a new spot or go home. Thus, the moment I found the Winter Garden, I was determined to continue writing. I had one extra scene to finish–a that scene ends with my protagonists leaving for the final conflict.

And that scene came about as easily as the average scene in my book–I felt it out as I wrote it, now easily trusting my sense for things I don’t like. This led to an even faster turn around than yesterday’s scene; within an hour, I worked the scene into something I liked, dropping weird, weighty elements and, despite thinking that it was an interesting idea at first, ultimately deciding against giving my protagonist a new weapon, preferring to keep him with his pistol and its handful of remaining rounds (because I’m a big fan of higher stakes and realistically bad odds).

Here, however, I finally stopped, wanting to get home and in bed at a decent time for the Dawn of the 2nd Day. But I also wanted to brainstorm the next chapter especially hard, to try and make tomorrow’s session go as smoothly as I could. That bout of brainstorming on the train was so intense and in-depth that I’m sure I looked like the weirdest weirdo to the people sitting next to me, who totally heard me laugh and whisper at least one line to myself because totally forgot I wasn’t alone.

But regardless of that going well, it is time to admit something that I’m only now sure of.

I’m probably not going to finish this book by the 30th.

There is a chance I’ll go ape shit tomorrow and Sunday and tear through the last chapters very, very easily (I have brainstormed them so hard that I wouldn’t be surprised if this happened). But there’s also a fantastic chance I’ll hit a huge hurdle that I absolutely promise I will not rush over. Because as much as I love NaNoWriMo and think it’s great, I have absolutely no qualms about failing the actual challenge to produce a better book. It’s my first time NaNoWriMoing and I’m super glad I accepted the challenge, but I will only disappoint myself by forcing the rest of the story–disappoint myself and impress no one.

But what I do promise is this–30 Days will continue until Memory is finished, because that is the victory that I want, and I refuse to stop until I get it. Very likely, that will only mean an extra day or two (Days 31 and 32 of 30 Days) on which I won’t be writing outside (unless I find that I can’t produce without being outside those days). Regardless, I will continue posting here.

But… will I soon be eating my words? Will I, in fact, go all-in tomorrow and belt out the rest of the book in one monster session? Will I only have a final, epilogue chapter to write by Sunday?? Will I freak out even more people on the train?? You can probably bet on that last one happening, yes.

But on the rest, I’ll keep you posted.