I’m instituting a posting schedule. I have to admit that this blog is hanging on a thread for me; I appreciate everyone who reads it, Likes, and Follows, but this public journal is still hanging on for dear life because so am I.

I’m perpetually on the cusp of total failure–riding it like an arrow on the wind, always slowly tipping down. It feels silly to make it sound dramatic; dramatic isn’t how it feels. It feels like absolute shit.

But, I’m going to work against the doubt and the hate–it’s what I do.

So, first step–blog more often. Particularly because I went crazy editing Memory last month, and I feel that would’ve been a good thing to share.

I had the task in mind–the need to edit the whole book, reinforced with the mantra of “one chapter a day.”

Then I sat down and edited the entire book in three days, taking breaks only because I had full additions to make and didn’t want to rush them. I don’t keep records of these things, oddly adverse to my own achievements as I’ve been. I should maybe change that (strange how unimpressed I am these days that I’ve finished multiple books, but I’d like to think it’s part of the process–that it’s a step toward becoming a person who’s whole thing is finishing their novels).

Regrdless, not being impressed doesn’t mean I’m not pleased; I smirk as I think about my promises to myself that I’d at least have the first few chapters ready for #Pitmad and #SFFPit. The time for that careful prodding is over, I think.

Replaced by a desire to just start writing the sequel for Memory–annoyed that I’m not rich so I can’t just start writing Alemachus (name pending) or other new characters. I can’t give myself the luxury of anticipation and freedom because I know that the arrow is still falling.

It still has a long flight ahead of it, I admit if I’m honest with myself; there is still much falling to do. The thing is, being realistic about writing means understanding that when that arrow’s flight is done, it still might end with a silent punch into the dirt. 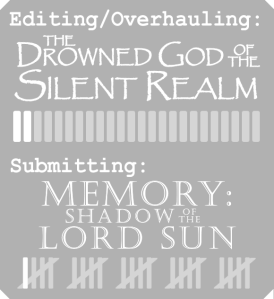 I finished my 3rd draft of Memory, and although I’m sure I’ll go through it again in a week or two (for… fun?) I’ve already started submitting. Pitmad went well for me, but I know in the center of my greasy heart that this is only the start of Memory’s submission run.

I’ve only just started editing The Drowned God, a short story I love, through which I’m finally learning the art of the short. In the update box here, I say I’m “overhauling” it, which I feel is appropriate; I often opt for small tweaks that are a ton of work to implement, even if they just slightly benefit the tone of a story (a global change in tense, for example). In The Drowned God’s case, it’s a far more annoying change, but the result will definitely be that short’s final form.

For more updates or completely random ideas, thought up in the mind of an insomniac (like, “You’re an air vampire”), be sure to follow me on Twitter–@LSantiagoAuthor. While I always appreciate a Like, Follow, or Comment, thank you just for stopping by. And, as always, write well.

One thought on “An Arrow on the Wind”