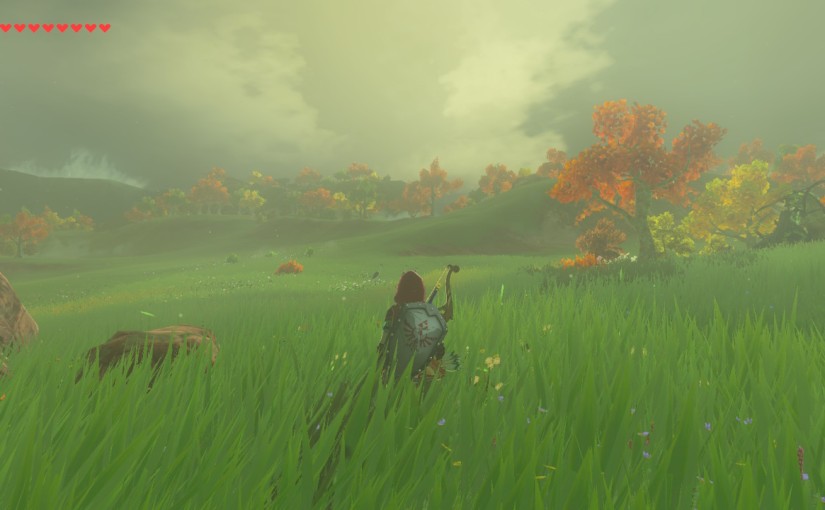 Two weeks ago was my birthday.

I got Super Mario 3D All-Stars and Breath of the Wild, both from my mom who, in my adult life, has become my go-to dealer for my Switch habit. Seriously, my Switch and all of my games have been gifts from her.

To be clear though, I already owned and beat Breath of the Wild on my Wii U; like a lot of people, I absolutely destroyed that game over the course of a few months and then put it down like I was entering the Odinsleep.

However . . . I recently saw a speedrun of it and the only let’s players I actually like, The Super Beard Bros., are currently playing it, so . . . “Is it time?” I thought. “Have I forgotten enough of that game? Can I play it again?”

And, yes; if nothing else, this post is to tell you that it’s time to wake from that Odinsleep.

But also, if you’re a Fantasy writer, then I just want to make you aware that your second playthrough . . . can play more like a beautiful, Fantasy simulation.

The Legend of Zelda: Breath of the Wild can be the most fun (although admittedly super loose) Fantasy world research anyone has ever done.

And if you’re a Fantasy writer like me who just played it as a video game the first time around (or if you’re a writer who hasn’t played it at all), I just want to state my case for why BotW works as a Fantasy simulator.

Simulation of the Wild

The physics and logic in BotW are so variable that I’m still learning new things I can do in it, three years later:

There are so many weird interactions and dynamics among the elements of the game that it’s just easier to assume an idea you have will work.

And that’s not an exaggeration. Are you in a dark room and see the outline of a standing lantern in the distance but don’t feel safe walking to it? Well, you can throw your torch at it. Or, if you don’t want to lose your torch, you can shoot a fire arrow at it. Or, if you don’t want to put your torch away, losing the flame, so you can take out your bow, you can drop your lit torch on the floor, light a normal arrow, and shoot that. Or drop your lit torch, take out a wooden weapon, light that on fire, and throw it across the room.

You get the picture. That scenario alone dips into an almost D&D level of simulation, where you’re invited to solve problems in ways that utilize real physics and logic . . . but with the added bonus that you have special magical abilities that affect that physics and logic. It is the epitome of a magical world working with internal, inherently understood logic, and it works so well that I could write an entire post about the Runes of Link’s Shiekah Slate as a great magic system (but I won’t . . . maybe).

What I want to focus on here is the fact that a lot of us took a while to understand the depth of BotW’s internal logic on our first playthrough. In fact, most of us still hear about some shit someone else did in BotW that we never did, and we’re like, “Wait wait wait. You can throw rusty weapons at those Octoroks on Dead Mountain and they’ll clean them!?”

What this really means is a lot of us never really understood the freedom we had.

Which means a lot of us didn’t just experience it.

And, when it comes to being a game for writers, I think that’s the strength of Breath of the Wild: the freedom it gives you to exist in a Fantasy world to the extent that you can even influence its physics. The game’s ability to make you feel like you really are ducked behind a rock on a beautiful, summer’s day, waiting for a monster to turn around so you can sneak up and steal its weapon.

And, unlike other similar games, there’s minimal bullshit, which I’d argue makes it significantly better.

Abridged Sim of the Wild

Yes, there is a story. Yes, there are cutscenes and, of course, there’s a game inside the game, first and foremost.

But there are no complicated dialogue trees that make your character super specific. There are no factions you have to join with motivations, outfits, and plotlines you have to adhere to. Link is a blank slate who doesn’t talk, and Breath of the Wild is the world you experience through him. A game where you get to be whoever you want and do whatever you want.

And that decrease in dialogue/cutscene distractions is complimented by BotW giving you shit like the temperature.

So, yeah, the temperature.

And, yeah, it changes with fluctuations in weather.

The above shots were taken on a sunny day in Akkala, the region of the game stuck in perpetual Fall. However, on another occasion, when I checked the weather at random, I saw it was way colder than 63 and thought, “Wait. Why?”

And then a storm hit.

but holy shit. I can check the wind direction by lighting a torch, and I can use that information to my benefit.

And there are things you can do to make it feel even more ridiculously immersive.

For example, you can turn the HUD to “Pro.” I’m sure you’ve heard about this if you were in the thick of gaming media when BotW came out, but not having a mini-map–needing to talk to people, ask directions, and survey your surroundings–makes it so much more immersive.

But you can also take it a step further by adding other caveats that make the experience feel less video gamey.

I, for example, only have the one horse, Cowhorse, whose location I keep persistent in-game; if I board Cowhorse in the Woodland Stable, I have to go back to Woodland Stable if I want to take her out again.

Obviously, you can take all of this as far as you want. For example, I don’t eat on a normal, human schedule because that would just remind me how fast the day/night cycle is, and make me feel the gameyness of the experience again.

However, I am playing a different head canon Link; for this playthrough, he’s more of a Raph: a stubborn, headstrong guy . . . who’s slowly learning that he has to do better, (which, in the beginning, meant that he went directly to Hyrule Castle with three hearts, almost got killed by Ganon, and is now following through on the rest of the quest as he learns to prepare for fights). Playing that Link has been extremely fun and su-u-u-u-uper rough; I died trying to get to Ganon, like, thirty seven times.

But, look, no matter what you do in this new playthrough, I suggest you also . . .

Talking to NPC’s in Breath of the Wild doesn’t feel especially realistic. In fact, a lot of NPC’s will flat out be like, “Press B to place your amiibo on the thing for Nintendobucks!” or whatever. So many of them that you won’t really be able to avoid the gameyness of their instruction manual-speak.

But the rest of the NPC’s usually have really weird, human quirks, which is both quintessential to the Zelda experience and, at the very least, interesting as extremely subtle microcosms of worldbuilding. Tiny, fleeting, sub-sub-subplots that I completely missed my first time around.

Leekah is a Hylian woman who I keep running into out in the dangerous Hyrule Fields. And, every time, she complains about how she just wants to go for one walk without getting attacked by monsters. Every time, she sighs a very 2020 sigh, runs off toward shelter, and that short interaction is so much simpler and more charming than the umpteenth character in Skyrim talking to me about another cave of bandits nearby. And really, even if it doesn’t feel realistic, “simple and charming” feels like a way better NPC model for a writer to experience than “complicated and generic.”

And, hey, I’m sure you can argue for the opposite; I know there are benefits to having long, linear quests with wordier NPC’s in other games. In fact, I’m sure I would’ve argued for that complexity 10 years ago.

But, as I am now, I will argue to the death for 4 NPC’s in a stable instead of 324 NPC’s in a fort town. Not because I think the latter is wrong and stupid, but because . . . dude, I’ve got shit to do today. I have to make dinner and there’s laundry, and I have to write my story.

And this is “Games for Writers,” not “Games for People Who Have Tons of Time, So Whatever, Dude! Fuck It!”

The urge to just keep adding to this post is so strong, but I just don’t want it to become a monster, so I’m going to stop here.

If you are like me, a Fantasy writer who loves Zelda and is just getting more and more freaked out by November 3rd on an hourly basis, then you owe it to yourself to just have this experience.

Just put down your phone, your WIP, and your existential dread for a few hours and literally get lost in Hyrule. With, like, a wet horse who’s still moody even though you fed her your last apple, and something weird and beautiful is always just around the bend.

I honestly never thought I’d write a “Games for Writers” for BotW, because it never felt like it was actually rewarding for a Fantasy writer, but now, seeing it like a simulator has made me so much more excited for the sequel. And for 2024, when I’ve forgotten enough of this game to play it again on Master Mode.

If you enjoyed this post, you can follow me to the left (on PC) or the upper right menu (on mobile).

Regardless, as always, take care, and stop checkin’ the news!

One thought on “Games for Writers – The Legend of Zelda: Breath of the Wild Is a Great Fantasy World Simulator”