So, a few weeks ago, I wrote about how much The Legend of Zelda has inspired my writing. In short, the series kindled my preference for uniqueness . . . and weirdness.

Because, man is The Legend of Zelda weird.

Now, to be totally honest, I’m still playing Breath of the Wild and still absolutely loving it. Loving it so much that I know it’s going to be my last adventure in gaming. I started with Zelda II, I’m ending with BotW. Because I know that it isn’t ever going to get better for me; there will never be a more cathartic experience than having my favorite series rally back against stagnation and massive criticism . . . by becoming a game I’ve wanted since I was 12. I got the unique, open-world, combat-heavy adventure I’ve always wanted, + Zelda. I’m actually quitting after this.

But, the one thing that disappoints me about BotW . . . is that it plays it safe with the series’ weirdness. As a huge fan of Majora’s Mask, I’m sad that there’s no terrifying mask salesman. No moon with giant, human eyes and a snarl.

However, there is one . . . creature in the game that absolutely brings the weirdness.

And for that reason, and a bunch of others, I wanted to highlight it here on the site. Because I feel that this one creature is a beautiful, perfect encapsulation of the entire Legend of Zelda series. That achievement, intentional or not, deserves attention on a tiny blog.

So, everyone, let me start at the beginning . . .  and explain how I found the thing called the Lord of the Mountain.

As is the point in Breath of the Wild, I was exploring Hyrule one night, setting out into a region I hadn’t explored yet. I’m not sure how many other people get neurotic about exploring every bit of Hyrule, but I’m obsessive enough that I get lost for hours just walking through fields, exploring canyons, etc.

So I was excited to find that this new region had a small mountain on it. Calm and quiet, I started hiking up its southern side.

And almost immediately found that its sandy ledges were home to crows. It stuck out to me, because I hadn’t seen crows anywhere else in Hyrule. Ultimately though, I dismissed it, figuring that the crows were just a bit of the region’s identity.

Further up the mountain, it began to rain, the world taking on a mantle of blooming fog. Normal too.

Until I reached the top of the mountain . . . and the fog became thicker. Brighter. The music began to change, and I became excited, thinking I’d found a fun, new secret.

But that was before I listened . . . and heard the creepy discordance of the fog’s song. I followed it through a cleft of stone at the top of the mountain . . .

. . . and came out onto a ledge full of spectral rabbits.

I didn’t move. I’d seen one and only one of these small sprites before–little, long-eared blooms of blue-white light. When a villager spoke about that one rabbit, he’d spoken of a myth. Now, there were at least fifteen of them, foraging around a pond, beneath a tree of pale leaves. All of it was silent in the fog.

I shouldn’t be here.

I tried shifting closer, but one of the spirits saw me and bolted, setting off a chain reaction. The rest of them bolted too, and I jumped to my feet, drawing my sword, expecting an attack.

And that’s when I saw it.

Among the rabbits, a larger beast dashed into the mist, vanishing with them before the fog faded. The pale tree turned dun, the clearing suddenly mundane. No attack came . . .

But I wanted to know what I’d seen.

The next night, I came back. Found the clearing again, made sure I spotted the beast first. A spectral horse, glowing just as the rabbits did. It was facing away from me.

I sneaked close, realizing this was a creature I could ride. Thinking that taming a mythical beast was meant to be part of my adventure.

I jumped on, soothing the phantom horse until it calmed down, smiling when it finally stopped bucking. Eager to get a better look at its golden horns, I turned to see its face. 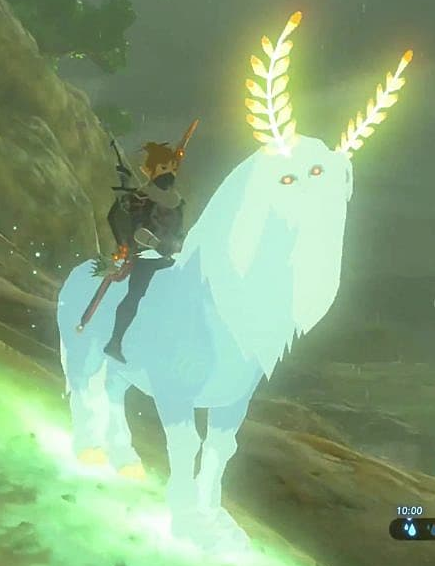 And I saw this.

To be clear, that is one side of its face. On the other side, there’s another set of tilted, golden eyes, staring into the distance. Those eyes are eerily out of place–too far to the side and too high on tandem faces that don’t move. What looks like a trunk is actually a cloth–or maybe a veil–hanging off of that face of masks.

I’ve learned about the medieval fear of the forest, a very real cultural trend that Susanna Clarke conveyed beautifully in Jonathan Strange and Mr. Norrell. It was a practical fear of wild animals that turned into myths of terrible creatures and gods who liked to trick and punish those who trespassed in their woods. The wild was a place that no one could control, better left alone, for everyone’s safety.

This creature’s face finally drove home that fear for me. The crows. The feeling that I shouldn’t have been there in the first place. The music. My exact words were, “Oh God. I don’t like this.”

Afraid and confused, I rode this thing down its mountain, thinking that maybe the game would confirm that it was a good idea–that there would be a cutscene somewhere, or maybe that the man running the nearby stable would compliment me on taming it.

“Why would you bring that thing here?

I galloped the entire way back up that mountain. I brought the Lord back up to its clearing and dismounted the moment we reached its pond.

The Lord looked at me, and then galloped off into the fog, becoming nothing again.

I never once went back to that mountain top.

But I know the curse is there. That I’ve incurred it. That there’s some consequence; a tax for fool-heartiness, meted out by a thing I’ll never understand–with a face of masks.

And that terror is a beautiful reminder. Those strange, terrible things that I love about the series are still there. If anything, they’re more horrifying now.

But, in part, because they’re also a great secret now, easily missed in a series that is all about secrets.

With barely any dialogue, this one creature made me feel all of these complex things. I had a personal reflection about the entire series and what it means to me, coming to a head with one simple, vague warning. A warning given substance by setting cues and major shifts in tone.

But also purely by character design. The Lord’s face, the ringing of its hooves as it walks, the fact that its horns are branches . . . it sells every facet of the series. The mystery, the strangeness, the lack of answers, the sense that we don’t deserve answers.

I can’t talk enough about how in awe I am of this one beast. I know a lot of its majesty in my story dependents on my extremely variable experience with it.

But I also realize that, as a writer, I have the ability to control a similar experience, making it uniform for everyone.

So now, creating a beast that achieves the same goals as the Lord is something I aspire to.

Because I want to give readers a moment this emotionally complex in one encounter with a silent beast.

Wow. I am sorry that went so long. TL;DR: man, that Lord on the Mountain sure is something.

Really though, thank you for reading, and I hope this one at least conveyed the experience I had, and made it clear how intensely the right design can make someone feel.

PS–The attempts to get on a better schedule and trim down longer posts will continue, I promise (sorry for this 1000+ word beast).

But, for now, my name is Louis Santiago, and I’m a fantasy writer based in the Bronx. My short story, “Aixa the Hexcaster,” was recently published in Mirror Dance Fantasy. However, I’m still very much learning about the writing process–still trying to figure it out. Part of that means posting on here every weekday, even though I make absolutely no money from it. So, if you like what you read here and feel up to getting an email every weekday–a new post from me delivered right to your inbox–then please hit the Follow button at the bottom of this page. Because, even though all I get from this site is emotional support, that support means the world to me.

Again though, thank you just for dropping by. And, as always, write well.