I don’t do well without distractions.

At this point in my life, being in a quiet room, without anything to do, ends horribly for me. Like characters in some of my older stories (vehicles for me to express the phenomenon), I start thinking of the many, many things that are going wrong in my life. Projects that aren’t finished, relationships that ended poorly, mistakes I’ve made. Anything that pulls me down into the silent, tight hole of depression.

It was happening at work the other day, because last week was especially bad for me; the news that an emotionally abusive and physically violent person from my past was–surprise!–living in my apartment again did wonders for my sense of dread, even before the difficulty of finding a legitimate apartment or room settled in. So, sitting at work, unable to focus on anything creative, the progression went something like this:

It’s going to take forever to find a decent room.

I’d be able to find one faster if I had a better job, but just getting an interview seems impossible.

I could get back to working on fonts, but that probably wouldn’t yield big gains.

And, besides, I can’t even focus on creative projects.

What if I’ll never be able to again?

What if I just die without being able to finish anything again?

What if “Aixa the Hexcaster” is the only story that I ever get published, because [and I can’t stress how honest and legitimate this fear is] I get murdered in my sleep?

At that point, I realized I needed any distraction whatsoever, because, for me, depression is always at its most debilitating when I fall into the pit of “I’m going to die.” I can keep myself from falling into it–settle back into a place where I’m just trying to be productive–but if I get stuck, I’ll be stuck for hours. And, of course I would, because, contrary to the word “sadness” being used interchangeably with “depression,” depression is a very different beast. Getting stuck and losing time is part of what that beast actually is.

For whatever reason–maybe because I just couldn’t think beyond the fears–I decided to pull up Google on the work computer. I fully expected it to be blocked, but I blindly typed in “Aixa the Hexcaster” anyway. I think I was trying to get to a review I’d seen on a message board: just one line talking about how, out of all the stories released in that Autumn’s issue of Mirror Dance, “Aixa” was their favorite.

But I was on image search, somehow–maybe an idle click while I was trying to stop thinking about depressing things.

I wound up pausing though–blinking. “Aixa the Hexcaster” is a pretty unique name, I’ve discovered, so if you google it, the top results are always the story itself, me talking about it, or images relating to it.

So, it was surprising when this popped up: 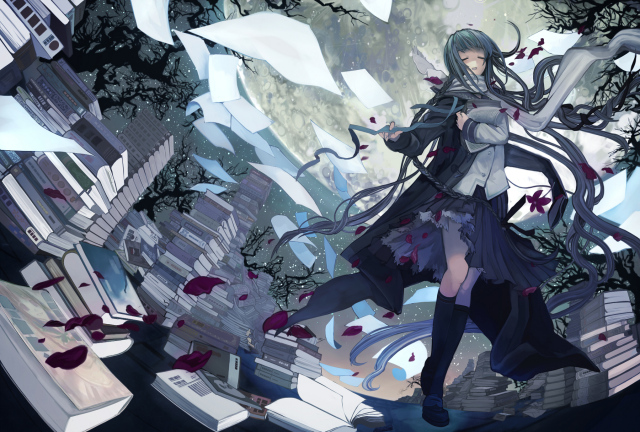 The very first thing I noted, for my own benefit, was that this was not fan art. I glanced at it, and in that first heartbeat, I made sure the first thing I admitted to myself was, “No, seriously, it’s impossible that this is fan art. Like, calm down. That’s not real–you ain’t there yet.” The woman in this picture? Clearly not Aixa Silva.

But what was it then? I followed through, clicking on “View Page,” hoping the resulting site wouldn’t be blocked by IT (‘Seriously, I never browse–just this once, IT, be cool’).

The list was a monster–Michael had put in a ton of time, even listing comics they’d enjoyed.

But, still, the same self-checking reflex that made me realize the feature image wasn’t fan art told me that this page must’ve been linked in error. To make sure, I hit Ctrl + F, typed in “Aixa,” hit Enter.

The page jumped down to “2016 Recommendations (Short Form)”:

The screen blurred. I only barely managed not to cry, but the effort meant I just sat there for a moment, looking at those words.

The gratitude I feel for those two sentences–seen at such a terrible, terrible time in my life–cannot be expressed. I cannot overstate how much it mattered for me–how much it still matters. It suddenly clicked again that, “Hey, man, you finished another story that you feel good about, and you’ve already started submitting it.”

“Yo, you almost finished the rule set for your own game; it’s almost ready to be tested.”

“Dude, you come up with new fonts really quickly. And, like, yeah, there’s still no way to tell if that will be profitable at all, in any way, but, hey, it’s still something you’re awesome at.”

At the best of times, you barely even notice that kind of progress.

At the worst of times, remembering it can save your life.

I need to sincerely thank Michael Matheson for single-handedly pulling me out of a really bad place a few days ago–for helping me keep going. Michael, even if you never see this, or maybe if you see it three years from now, thank you so much.

To everyone here, thank you too. I have always appreciated everyone who stops in to read this blog. Creators say this kind of thing all the time, but, genuinely, without the support, I would not be able to justify doing any of the things I love doing, and I don’t even want to know where I would be if that was the case.

As a quick update, I have been delving into two other modes of creativity:

Writing-wise, I keep working on new ideas for shorts, looking for new places to publish them. I’m also getting started on rewriting an older novel. It means putting a newer one on hiatus, but I honestly haven’t done enough worldbuilding for the new one anyway, so that hiatus was happening regardless.

All of that said, I have to get back to packing and looking for apartments. Thank you again for passing by.

And, as always, write well.